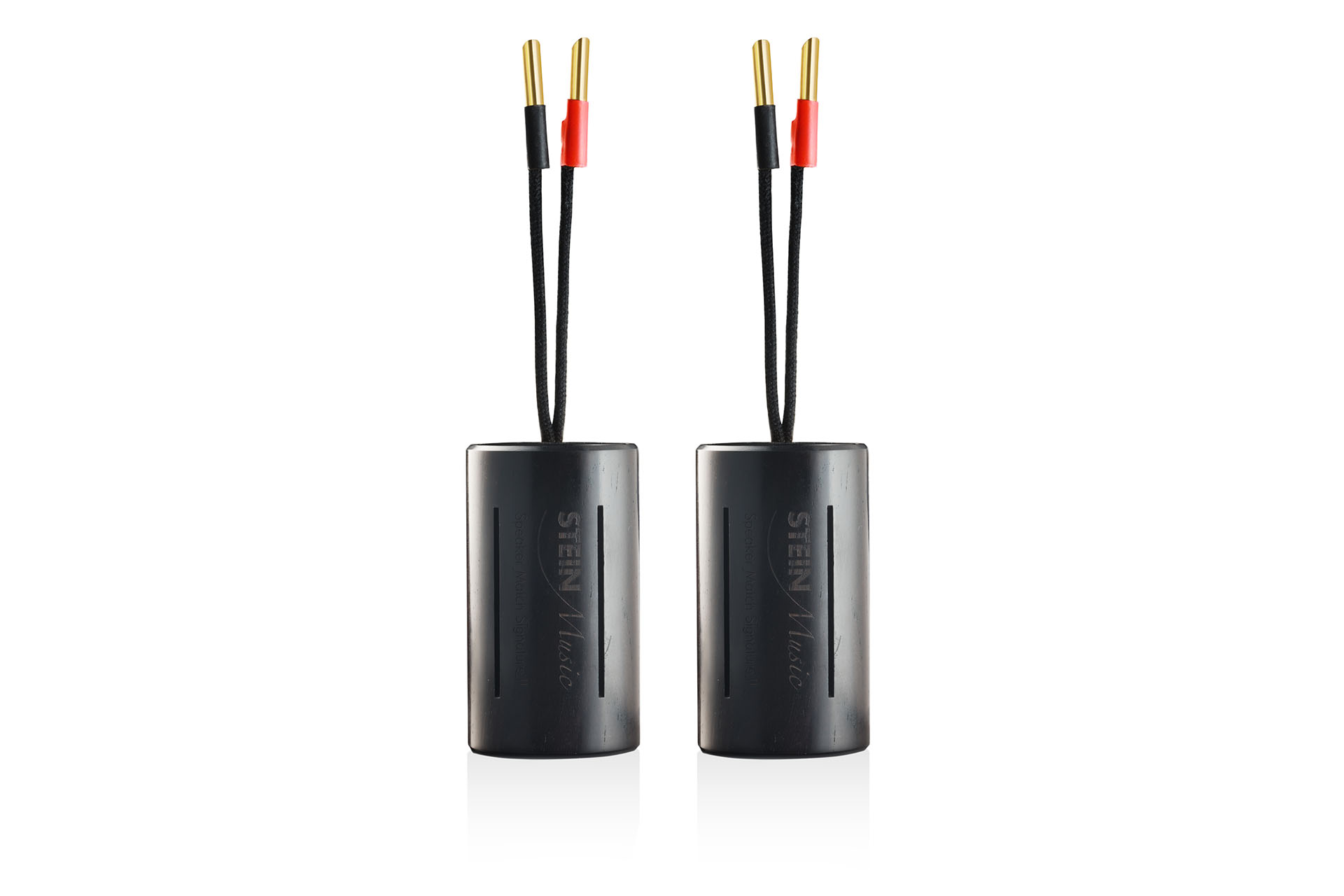 The perfect matching between amplifier, speaker cable and loudspeaker.

The Steinmusic Speaker Match Signature is a special matching element to bring to perfection the interplay between amplifier, speaker cable and loudspeaker.The result is a handier, more articulate sound image across all frequencies, which tends to be mellower and less strained.The Signature Version is the cost no object approach of the Speaker Match technology, to achieve uncompromised results for those who simply want the best.

Only tightly matched custom made components like high class paper in oil capacitors are used, combined with the proprietary Resonance Control Technology and the Steinmusic Quantum Technology.

The housing made out of finest African Blackwood.The tonal qualities of African Blackwood are particularly valued when used in woodwind instruments, and also as a housing for the top line of Speaker Match it does not only reflect the inner qualities but also has a positive effect on the sound, as the dense material is controlling resonances precisely. Specially engraved slots that segment the body are constructional details that further improve the resonance control.

The final result is a very natural and “real” impression of the music. 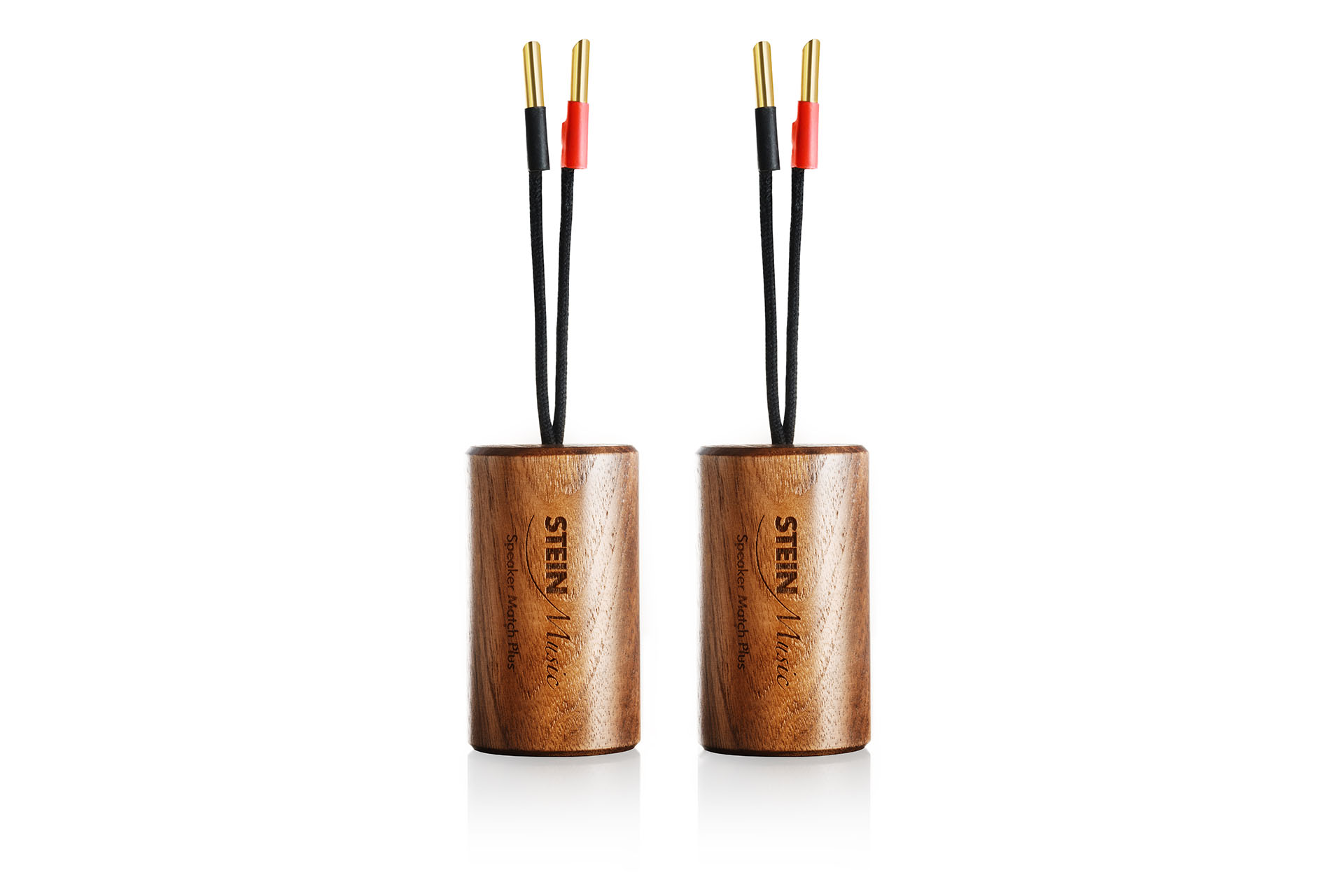 The Steinmusic Speaker Match Plus has a lot of the merits of the Signature Version, and uses all the techniques which are also used in the Speaker Match Signature.

Speaker Match Plus is the next step, providing a clear transition and improved noise reduction for the amplifier, speaker cable and speaker system. The result is an even clearer sound image that builds on the original design, with improved resonance control in a fine, tonally neutral cabinet made of solid walnut.

By sure we needed to cut corners, but the challenge was to compromise in a way that the overall result is balanced and convincing, for half the price of the Signatures.

This version has the best price performance ratio, and got excellent reviews worldwide like “Best Buy” at Fidelity, the biggest magazine in France or “In my opinion, this is THE BEST high-end audiophile accessory ever, my friends. Bravo Stein Music.” At Positive Feedback by Bob Levi, president of the LA/OC Audio Society.

The basic idea behind the Speaker Match

Speaker Match are based on an old idea we tried already more than 20 years ago using a Zobel at the speakers built out of the best and most expensive components available. This already made a big difference to standard parts normally used in commercial versions.

We spent a lot of time to find a universal approach, which is working perfect in all kind of constellations, and although I did not expect to be successful with this task indeed we found one. 10 years later we could improve this already very good design further, just by molding the internal parts into a special designed casting compound, which was not dampening but stabilizing the total performance in a big amount.
Zobels are well known as they may have a positive effect on the sound. They may reduce high frequency distortion and intermodulation created by other electrical devices used at home, like energy saving lamps, computers, refrigerators, etc.

The advantages of Steinmusic RCS (Resonance Control System) in Audio Electronics at the example of Steinmusic Speaker Match
All electronic circuit using resistors will generate heat when current is flowing.
This must not be much depending on the topology where it is used in, and most of the time you will not even remark it, but this is always the fact.
Heat is nothing but the movement of the atoms of a material. In audio circuits these movements are produced by the music signal. Depending on the material properties, dimensions and structure of the surface these movements create specific material resonances. In reverse, these resonances will have an impact onto the current flow through the resistor which is nothing else than the musical signal that we want to keep undistorted.

The typical approach here is to dampen these resonances.
This absolutely is not our idea, as experience shows that dampening also draws musical energy that we want to keep, and so often makes a somewhat pleasant but dull sound, where many details and finesse get lost.
Another approach is to stabilize the environment, for example casting the parts into concrete. Here we found that the sound gets stabilized, but also is influenced by the character of the material used. Like at an instrument you will always find the sonic signature of the material in the sound that is generated. Concrete gives a pretty hard sound, wood depending on what kind of wood used a more soft and sometimes pretty pleasant sound. Overall, more natural sounding materials will lead to a more natural sound also in the electronics.

For the Speaker Match we use a combination of a special casting compound that is optimized regarding its sonic properties together with a cardboard housing that is soaked with a special resonance optimizing lacquer. The casting compound ensures that all surfaces of the components are completely encased; the treated cardboard provides a good outer surface. The quality of the outer surface is very important, as at this surface like at a billiard table all internal resonances are reflected into the material again. So the character of the surface always has a big impact onto the overall resonance pattern.
This idea by the way is also the active principle of Steinmusic Maestro lacquer, which has a very positive effect on sound used on nearly all surfaces like speaker diaphragms, tonearms, connector housings, etc. in an audio system.

How this special resonance controlling system in fact works you may easily monitor comparing the series version against the second sample I sent you: the only difference is that the later ones do not have the special compound used.
We already tried Speaker Match with a wooden housing, which was a further step to the better.
However this is a really big effort, as to work perfectly there needs to be a close contact between all parts inside, and using the special compound is not easy in combination with wood.
The positive effect that you may easily detect: Sound is much clearer, smoother and more detailed using the Steinmusic RCS.

The positive effect that can easily be seen: The sound is much clearer, smoother and more detailed with the Steinmusic RCS. The Steinmusic Speaker Match Plus has many of the advantages of the Signature version and uses all the techniques used in the Speaker Match Signature. Of course we had to make small changes, but the challenge was to find a compromise so that the overall result is balanced and convincing. All this for half the price of the Signatures. This version has the best price-performance ratio.