HiFi High-End Amplifier– The Stateline Amp2 is the result of years of research in which we have optimized every detail of the circuit topology, as well as the selection of the best components for each location according to our understanding of music. Having an integrated amp with DAC, line stage and power amplifier is pretty complex, as there are many interactions to consider. The advantage on the other hand is that we may create an integrated device with very coherent qualities. 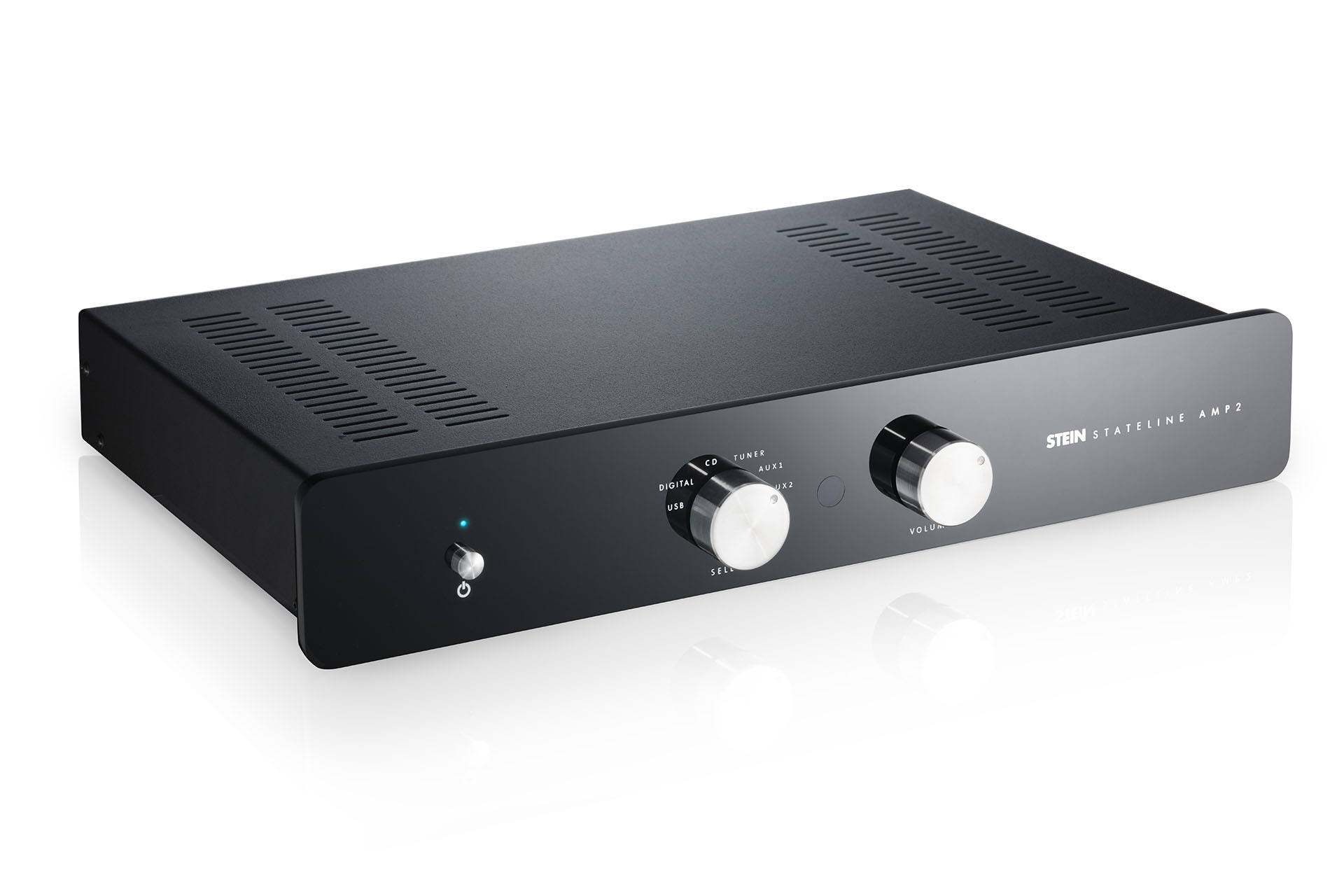 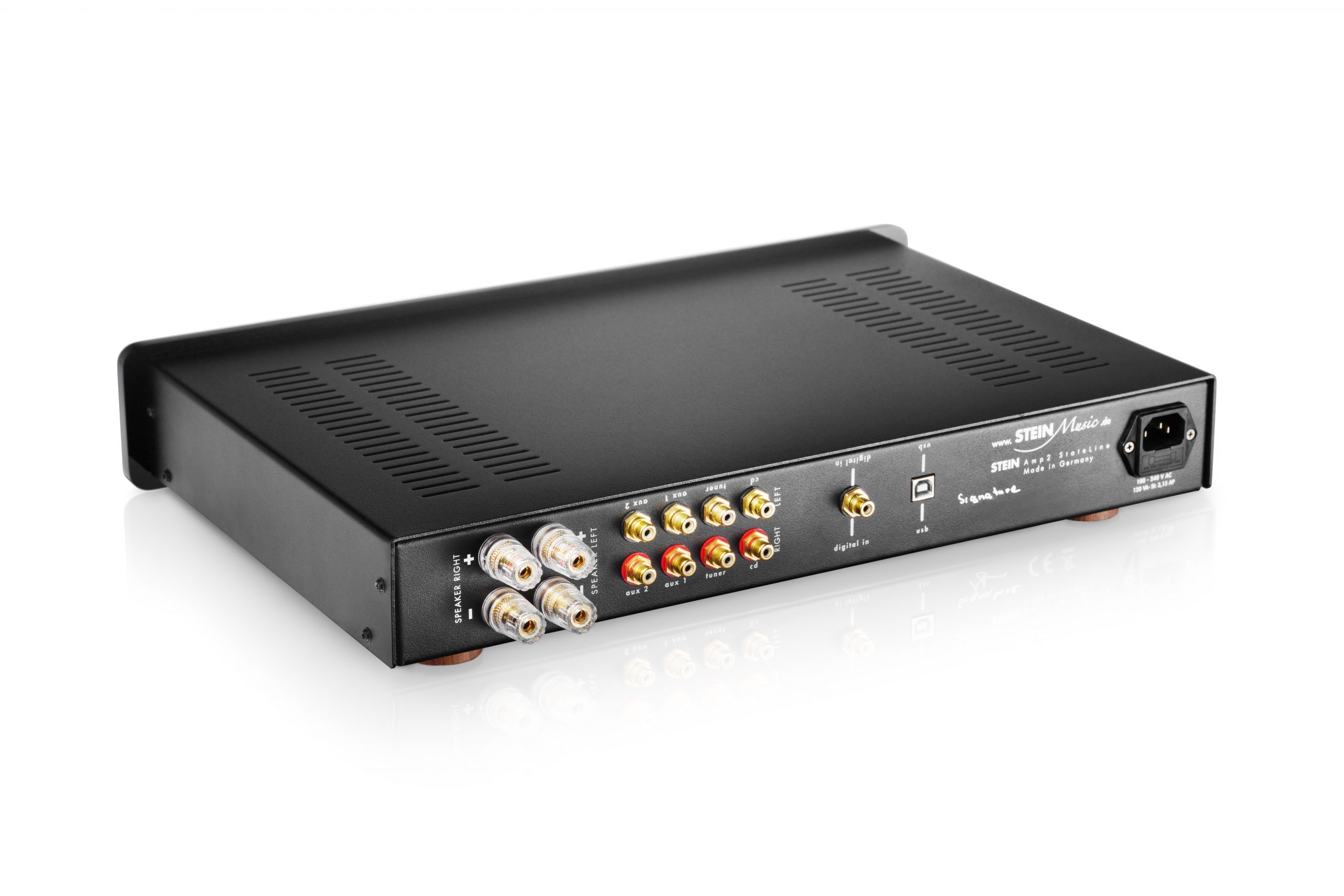 The Basic Idea behind the Stateline Amp 2

At the line stage we started according to Einstein’s statement “Everything should be made as simple as possible, but not simpler” with a one transistor only circuit and zero negative feedback. This sounded beautiful with an extreme selection of active components so that it works properly as intended.

THD are mainly second order in the region of 0.2%, which we personally prefer over a lower percentage of distortions when they are 3rd or 5th order. Lower distortions mean more real information- If they do not go hand in hand with higher transient intermodulation caused by negative feedback. So we ended up with a circuit using two transistors where the second one works as an error correction amplifier, which is not in the actual signal path.

We do not have any feedback from the output of the line stage to the input with all its negative aspects, however, we could lower THD of this stage to 0.001% maintaining the aspect of having mostly 2nd order distortions.
Listening comparisons show that much more musical information became present being two magnitudes further away from the distortion level with this concept.

Normally being friends of discrete transistor circuits, we decided to go for the advantages of the shortest possible signal path of an integrated solution.

The output stage runs in a bridged circuit mode, which means there are two amplifiers per channel and the speakers plus and minus terminals are tied between these two amplifiers.

Hence there is no current flow on the ground plane, which is very positive for low level resolution as ground is the reference point for all signals.

Another aspect is an improved dampening of the speaker, being pushed and tied by two amps.

Remote controlled custom made Alps Pot with linear characteristics which has a significantly better matching between channels than any log pot. It has special taps, where adding a resistor of a dedicated value we may convert the characteristic perfectly to the characteristics of the human ear, without the disadvantage of poor channel matching that in the nature of a log pot.

All stages are decoupled by 5 different voltage regulators, using low noise discrete circuits for the line stage and DAC. Total power supply capacity besides the basic SMPT is more than 36000μF combined by different types of caps that have been chosen by their sonic performance at each place.

The DAC is a non-oversampling concept, providing bit correct performance and may be fed via SPDIF or USB. Stateline Amp 2 accepts sample rates till 96KHz. Finally, the Stateline Amp 2, despite its small size, is a hi-fi high-end amplifier.

The performance and circuit data remain identical, the design is supplemented with extra OsCon capacitors and E-Pads and important components are additionally treated with Maestro lacquer. The acoustic result is even finer, freer, more natural and more vivid.